After the tragic incident with Lord Drax and his failed siege, citizens of Delucia once again returned to what they have always done, survive and rebuild on the edge of the world keeping monster and evil at bay from the good people of Sosaria!

Many, many sheep were recovered and the Delucia Sheep Farm was officially open again to the public.

While the town was gathering resources left on the battle field, it was decided that a memorial of this day should be made and thus, the Delucia Museum and Plant Sanctuary was created in what used to be an eyesore of a wyvern's nest!

A map was also discovered as a "place of interest", maybe this was part of the Gargoyle's future plans for revenge! Thanks to everyone that came to save Delucia, we held strong and did right and the Mayor of Delucia congratulates you on your victory! Was even glad to see a gang of reds early on, even if they showed little or no 'compassion' when they slaughtered me.

It appears the gargoyles have ventured slowly out of their cave.
Top

Nice, I've been waiting for that to happen

The forces in the Compassion desert have grown over night. A bloody pentagram surrounded by magical energy has been discovered in the southern corner of the Desert. It's purpose and origin is currently unknown. 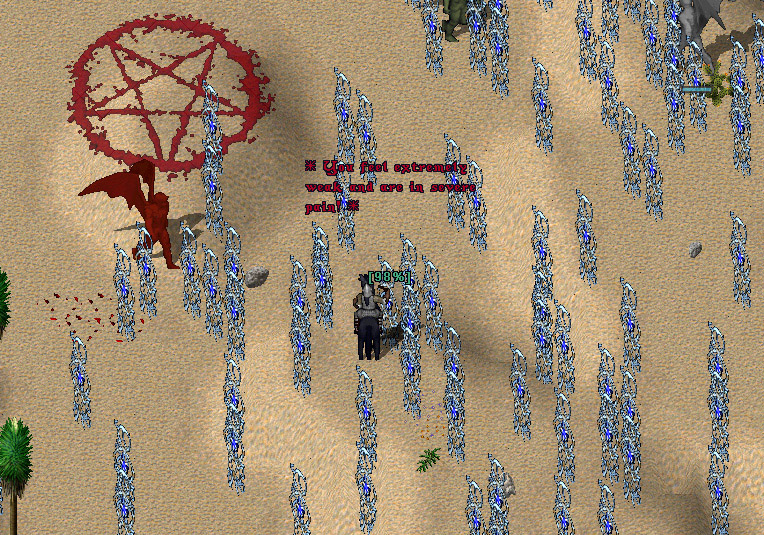 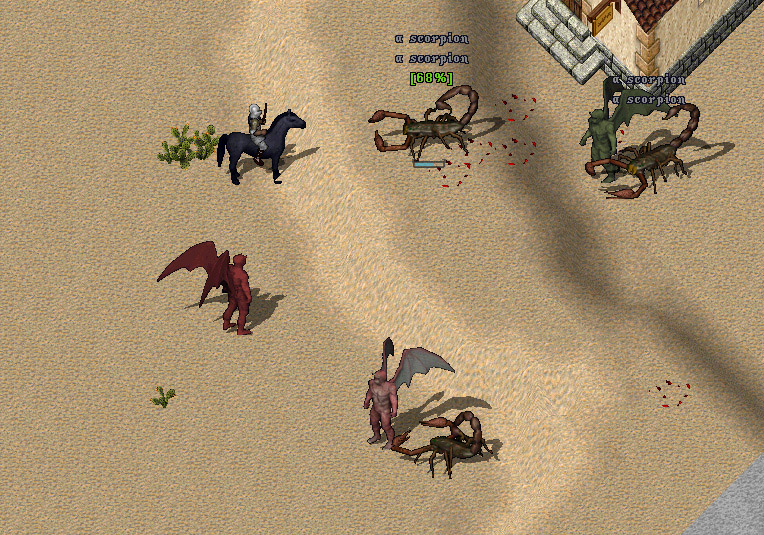 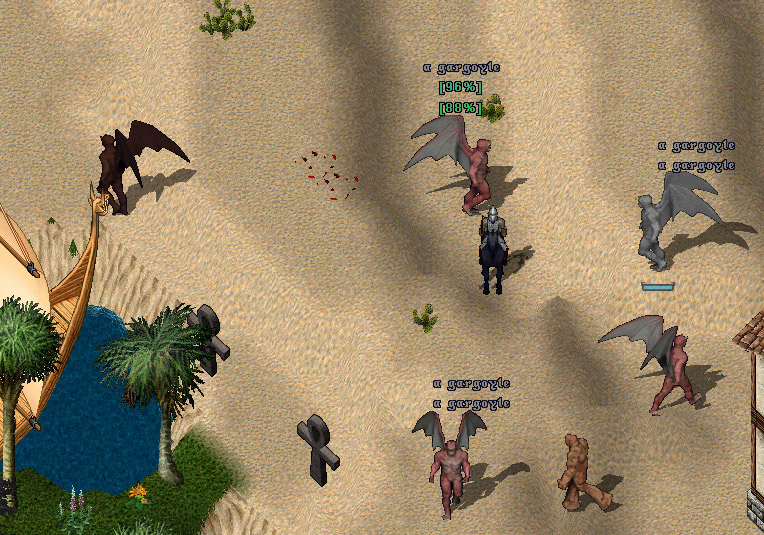 I kirred stuff there, no silvergate!

Silvergate only happens once a year

Lord Draxinusom will be arriving in the Compassion desert to ensure that his army does not fail again. This battle will take place on Sunday afternoon. This is the final chapter of the Gargoyle Wars. All who can attend are encouraged to do so.

Technical Update:
Today (Saturday) in the Compassion desert there is a progressive spawn similar to Monster Bash. Slaying Gargoyles will increase the rate of spawn and difficulty of the spawn.
Eat. Sleep. Ultima.
Top

I hope Draxinusom will manage to win a battle this time. A Lord should do better.

If he loses, maybe he can again become a friend of the Britannian people, but this time out of compassion, instead of sacrifice.
"The Finest Arms, Armor, and Service. UBB."

Cromwell wrote:I hope Draxinusom will manage to win a battle this time. A Lord should do better.

If he loses, maybe he can again become a friend of the Britannian people, but this time out of compassion, instead of sacrifice.

It figures the one event I will miss will be the last one. I have participated in all of these gargoyle wars and spent numerous hours in the "pre-invasion" areas when the silver/trophy drop rates are intentionally dismal. Now I can't be there and be rewarded for all of my previous effort. Yeah I'm officially whining, I wanted to see him bite the dust. At least one of you mf'ers get lots of pics and post them.
Top

Today at 1pm EST, Lord Draxinusom will be summoned at the blood pentagram in the Desert.

Battling gargoyles between now and then will slowly reduce the amount of magical energy surrounding the pentagram, making the battle with Lord Draxinusom easier. 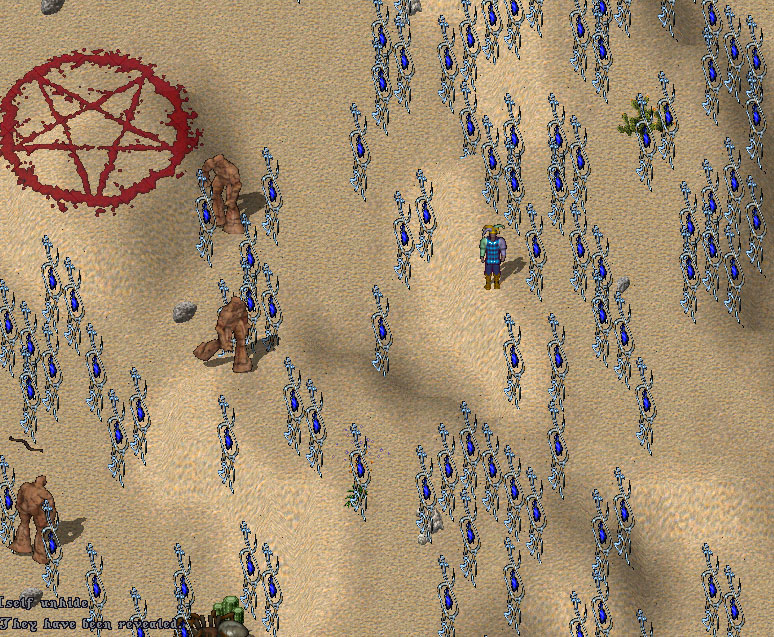 Lord British has set a bounty of 500,000 gold coins for any man who can manage to pull the head off of this Gargoyle Lord. 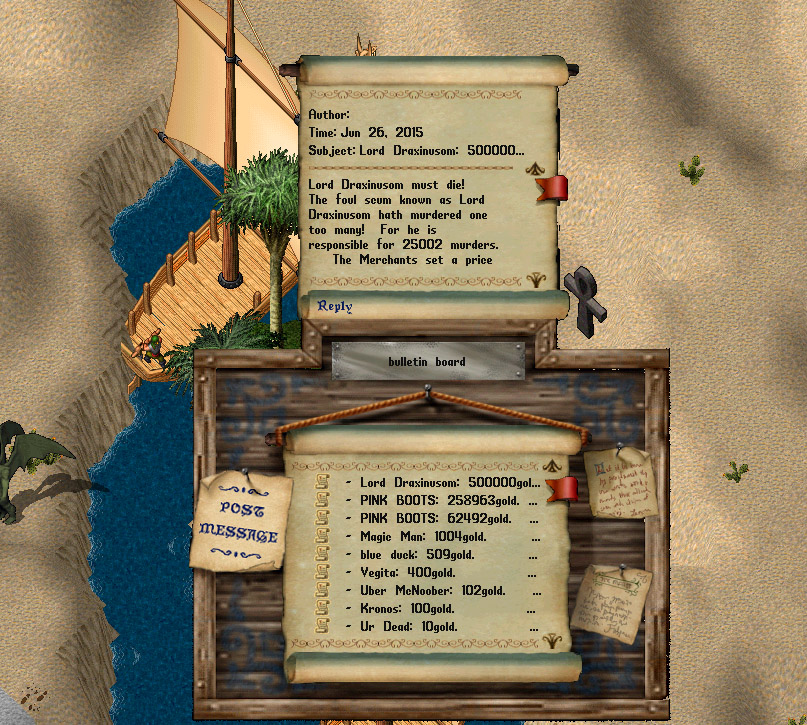 What a great event ending.....Thanks to all involved for making sunday a great time for me and my boys!
"Terrifying vegetarians everywhere"
Top

thought i took a lot of screenshots, seems I messed up, this is only one. Another great event! 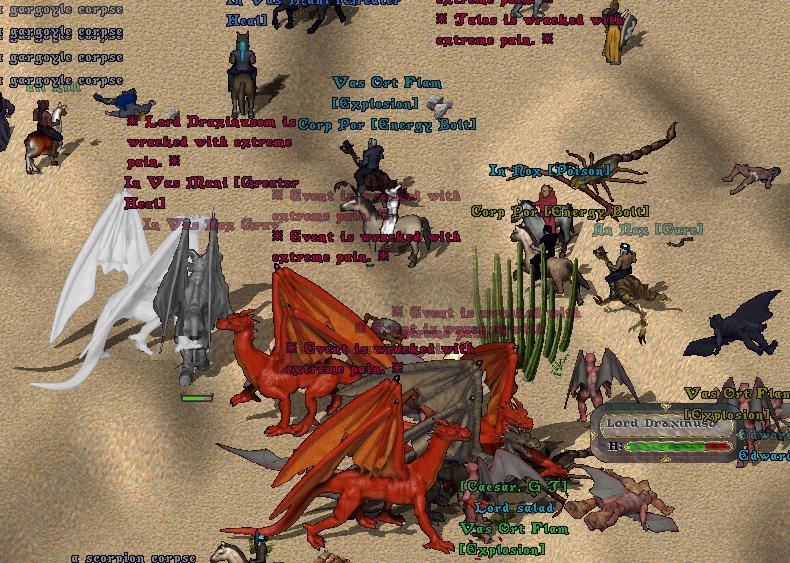