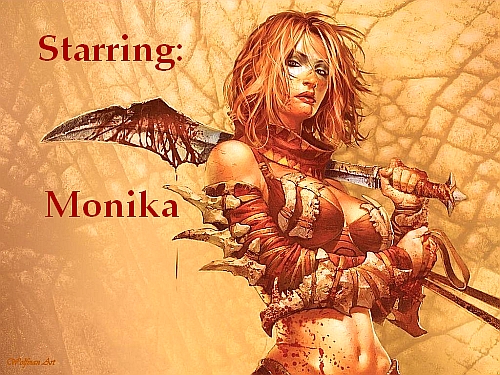 I woke up early to the sounds of the birds chirping outside my home. For the event was about to begin soon. I heard the bells ring and ran to make the signups. The event was really fun and I was awarded one silver coin for my team's victory. I then ran back to my mount on top of the West Brit Bank's roof to talk to my friend Dragonlord. He seemed to be a little out of it and was not responding to me so I decided to take a stroll around the city. I ran to check out the Brit Graveyard which is a place I am very fond of. I do not know why but it must be because of Proserpina, she whispers things she likes to me. Legend has it she was Queen of the Underworld once a very long time ago, now she has become my closest ally and stays by my side wherever I go.

In the distance I saw a portal open and out came someone by the name of Malice, soon after his pawns emerged. For some time I have grown interested of the so called Terror Guard, they seemed to possess the professional qualities I was looking for in a guild. For it has been a long run of countless guilds who could not meet my expectations. There was a silence as I stood there waiting patiently waiting for the inevitable challenge from the legendary leader. The words were then spoken as I accepted, I quickly went to bank any good belongings I had in case of his pawns stepping in to outnumber me. For if I were to die I know a adept mage who is trained in the healing arts who could resurrect me back to this plane.

After I returned the duel then began. I quickly disposed of all my magical energy since I had no weapon combat skills so I had to kill him quick. I had him to the point of death and casted a harm spell and it wasn't enough and he then healed himself. Then time went on and he attempted to kill me over and over, he tried to hit me with his halberd many times but was easily avoided. His patterns of attack were easily predictable and even easier to counter and avoid all together. I then said that I shall be back with my armor and my weapon and shield, but he was filled with so much frustration and rage that he kept on attacking relentlessly. I simply ran back to gather my combat equipment for it was time to show my true power.

The duel then began as we both casted a weaken spell upon each other. As I charged him I unsheathed my blade and grabbed my chaos shield strapped to my ostard whose name is Deadtail. The fight was then distracted by a couple known murderers. The three TG members and I charged after them, the one known as CmAN was easily dispatched and I delivered the killing blow. I then preceded back to the entrance of the graveyard to continue the duel to maybe prove myself worth to join the Terror Guard.

The duel lasted for awhile. For I had Malice on the run many times, a couple times almost killed him but some kind of force was not allowing me to finish the killing blow, which was many times. I was very focused and determined to win the duel. I had to keep drinking healing potions and trying to heal myself in mid-fight. But soon my potions were running out and he kept using a poisoning spell to negate my healing abilities. At one point I was near death with an array of spells he casted, which I knew had to of drained the last of his magical energy. I simply pulled out a healing wand I had tucked away on the side of my skirt and used it on myself. We then preceded over back to the entrance of the graveyard where our duel continues and I was no where near giving up. Then out of no where his pawns stepped in and started casting spells at me. The only remaining guild that I had respect for broke the code of a duel. There excuse for doing so was because I pulled out my most needed healing wand, which to me didn't seem to fair since he was training in the healing arts and all he seemed to cast was In Vas Mani. I had them all on me and tried to make a run for it, but was soon paralyzed by countless spells and I was defeated. 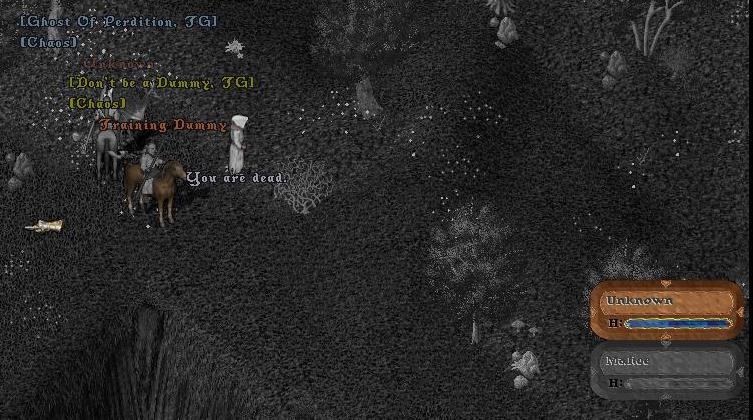 They started to loot my belongings but seemed to change their minds as they gave me back my armor weapon and shield, but they took all my healing bandages and abilities so that it would render me useless. I could then feel a deep anger bellowing deep down in my soul... I started to turn berserk with rage. I could feel Proserpina begging to take over. I tried to fight it but the rage inside of me continues to grow. 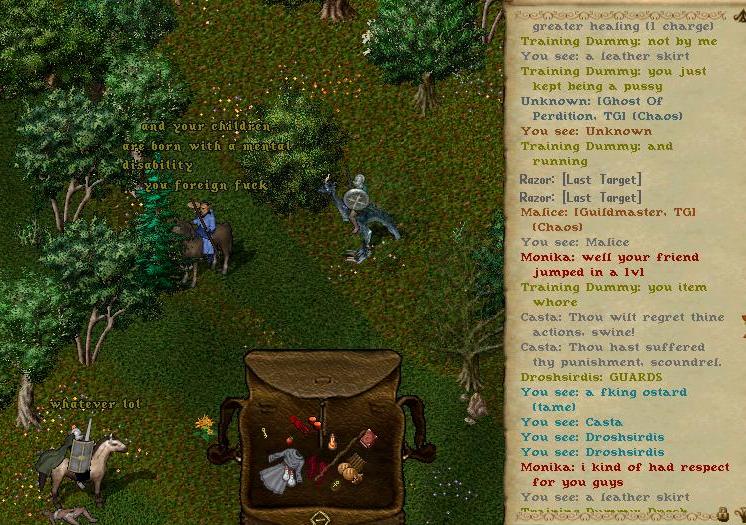 As I stood there listening to the TG member brag about the cowardly act of breaking the code of a duel, I started to lose it. The rage had taken over my entire body and I blacked out. 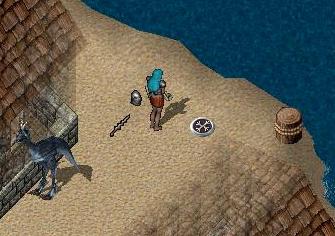 I then woke up on the beach with the sun hitting my eyes. I laid on my back and stared up at the sky. I moved my arm over my eyes to block the sun and I noticed I was covered in blood. I then stood up and found my equipment scattered on the floor. How long had I been knocked out? I then felt a rush of calmness as Deadtail came over to started nudging me with his head. It was time to leave, as I started to leave I then stopped and was hit with a sudden rush of flashbacks. 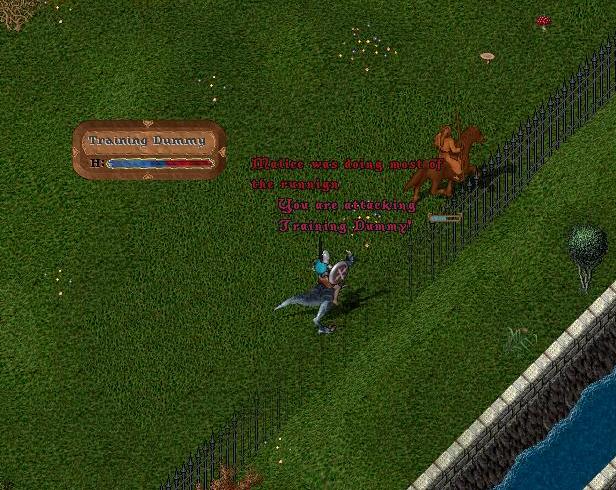 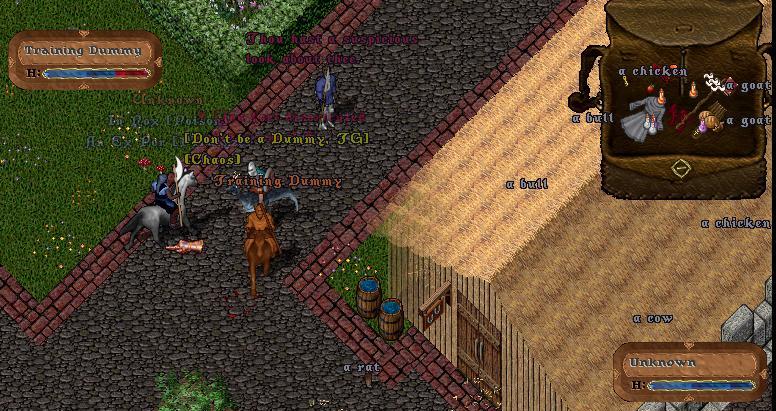 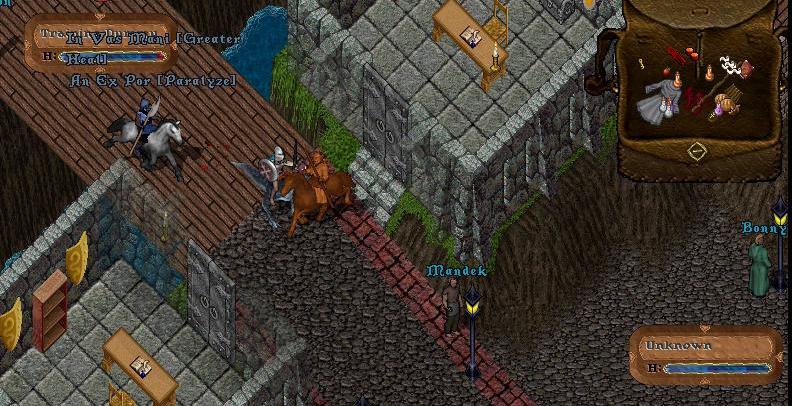 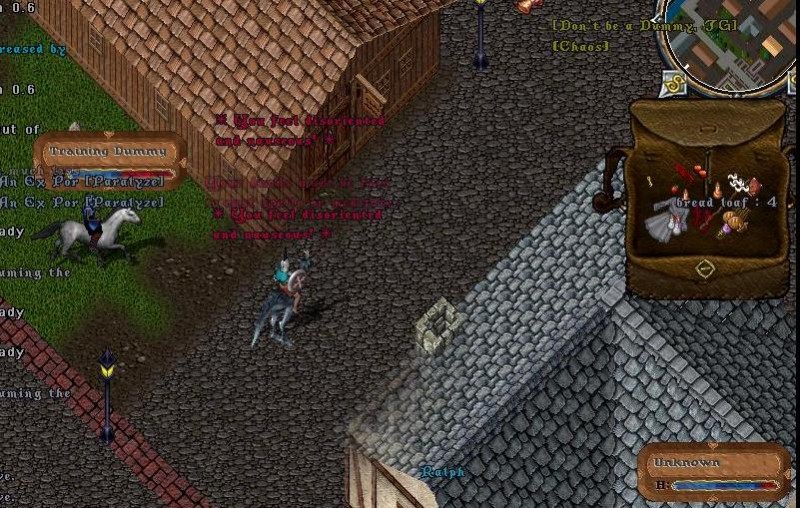 I then paid for a room at the local inn. I sat down tired and exhausted from the long battle. I laid down in the bed thinking about the events that had occurred. Is there really no one out that is willing to challenge to a duel without having their allies jump in? If not even TG the last guild I respected in the lands could not uphold the code of the duel then who could?

I realized that all I could do is focus on finishing my training and trying to raise my own army. The world seems to revolve around the number of people on your side. The Daemon Cult will be ready in time but so much must be done. I need to finish my training, establish my stronghold, there is just.... so much... to do.

I was right under that tree below you as you stood by your corpse. I seen Malice's corpse lying there as well. I had stealthed as fast as i could to watch the rest of the fight, only to find you both dead. I had seen glimpses of it afar near the enterance of the GY. I had thought you had killed each other.

Who did kill Malice by the way? Was it the dexxer to the south, was that the one Dummy wished death upon his whole family?

See I was right there.

Insufficient mana for this spell

EDIT: well I had no idea of the drama surrounding this user. Still, there's no reason to accuse me of being someone's alt account. Idiotic.

"I consider most of you NPC's that inhabit the single player game that I am here to enjoy." - MatronDeWinter
Top
Post Reply
Jump to

Return to “Tales of Adventure”