This last week saw the change from FoW to C^V. The guildhouse was moved to just outside of Vesper, directly above the west bridge. IRC channel has been changed to #C^V, and the guild forums here were updated to display our new name (thanks to Derrick.)

Meso, also known as Mahoney, has become the guild's first Veteran member. As a vet, he will be helping to lead the guild and share with some of the responsibilities.

Guild forums have been updated. Content includes a new main page and a post explaining the guild rules. Some of the content in existing threads updated as well.
- Elisud
Top

This last Sun. our first guild meeting was held. While a few different topics were discussed, we focused primarily on ways to increase recruiting and activity.

Christof and Pirul have been made Veterans. As guild vets, they will be given many of the same resources and privileges as I have to help co manage the guild, particularly with finding and helping new recruits.

As our guild colors are black and grey, we've decided to start a fund for our own black dye tub. Below is a record of the donations.

*March 2nd, Pirul and I went hunting, brought back a bit to add and stumbled upon a daemon bone chest piece


Finally, we have a new guildhouse! Since the guild moved from it's original location in Windmere, I had been seeking a larger plot for a guildhouse that would still be very close to Vesper.

The two story that had been behind our guildhouse had been seeing less and less activity...tues evening it went idoc. After a night of limited sleep from Pirul and I (both setting our alarms to get on before server restart time...yes, we're that committed to UO

) we spent the morning watching the house.

At 11:15 the house fell, after some looting from a few others who had been watching it, I cleared a spot, placed two smalls, and later that night, Pirul and I placed our new guildhouse.

At last! We have kept our location just outside of Vesper but with a larger building more suited for our guild.

Cattie aka Miranda, the Guildmaster of our allies, B-D has very graciously given us a black dye tub (!)....Tho she may be leaving SA in the future, she has also joined us with her char Miranda for the time being.

The tub fund is no longer necessary of course. However we were able to save up a nice little bit of coin...I'll find a use for it that will benefit the entire guild.

This last month has brought us a number of new members, all of which have turned out to be great additions to the guild. Attendance has been great, with daily hunts consisting of many members. Our newest member, Psilo aka Orphik Deranger (former guildmaster of ZsV), has been made the first Elite member of the guild, showing his status as an exceptional pvper.

The guilds funds formerly raised to purchase a black tub have been used to fund our first resist session.

A recent change in policy, all full guild members (non recruits) will now be added as friends of the guild house so that everyone can use it's features to log, ban, and access our supplies. Feel free to take whatever you need from our inventory.

All guild veterans will now be made co-owners so they can have full access and add/remove friends as necessary.

Speak to myself or Pirul to be added to the house.
- Elisud
Top

A recent change in policy, all full guild members (non recruits) will now be added as friends of the guild house so that everyone can use it's features to log, ban, and access our supplies.

That is a very welcome change, and something I was thinking about bringing up to you. One time after a hunt, Cattie, Cado, and I went back to the guild house to split... and then I realized none of us were friended there and it made for a hasty split (and future splits done at either Cado's or my small, cramped houses). I like the idea of the guild house as a gathering point, so allowing us to do so without you or Pirul there will encourage that.
Stuff That Looks Like Jesus
Top

This last week has seen a number of new recruits join the guild. To everyone, welcome!

Pirul has gotten us our own guild channel in Ventrillo. This will help tremendously in group pvp. Much thanks to Wise for adding us to the shard's vent server and thanks to Pirul for taking the initiative to get this started.

Cadohewin has been named a Veteran for his continued loyalty and support of the guild, he'll be a great addition to our group of guild leaders.
- Elisud
Top

The last month has turned out very well for the guild. We've held our first two pvp training sessions, both turning out to be a lot of fun and some good practice for our members.

After some discussion with Sir Eric Kain, we have named our two guilds to be allies of each other.

Due to a number of unknown players seeking recruitment and some potential threats from griefers, we've changed our stance on recruitment. Players referred to us will not be accepted into the guild. We may still recruit, however the players who do join our ranks will be of our own choosing.

After purchasing the two houses next to the guildhouse, we have made the one directly beside it our crafthall. It is setup with all of add-ons needed for crafting, as well as a few other items to help out with crafting. Thanks go to Pirul for setting this up for us.
- Elisud
Top

As most of you are aware by now, Elisud has decided to step down as Lord of The Company of the Vigilant. This is definitely a huge loss, not just for us, but Sosaria as a whole. He has asked me to step into the position of Lord, proposal which I have, with much honor, accepted.

This recent change in leadership will not bring immediate changes, as this is the way we were founded, and whenever Elisud asked my opinion on any matter (which was very often), this is the way I would have run the guild too.

In the future, time providing, I hope to see an increase in our involvement in organized events, or even organizing events for the whole community, not just C^V. To start us off, I encourage you all to support our allies, PoV, and their upcoming 2v2 event.

I believe it had not been anounced formaly, so, it is also my pleasure to announce that several days ago Cattie, aka Miranda, aka Contessa, was named a Veteran of the guild for her continued support, loyalty, involvement in organizing guild activities.

Also, after several months of looking for the owners of the small brick house in front of the Guild House without much success, it was confirmed it was abandoned, and finally was in danger of collapsing last night. After some camping done by Karl Franz, Miranda, and myself; this morning, between 9:00a.m. and 9:30a.m. EST, the house fell, and we were able to place another small in its place. This means the whole area north off Vesper's bank west bridge is now owned by C^V. 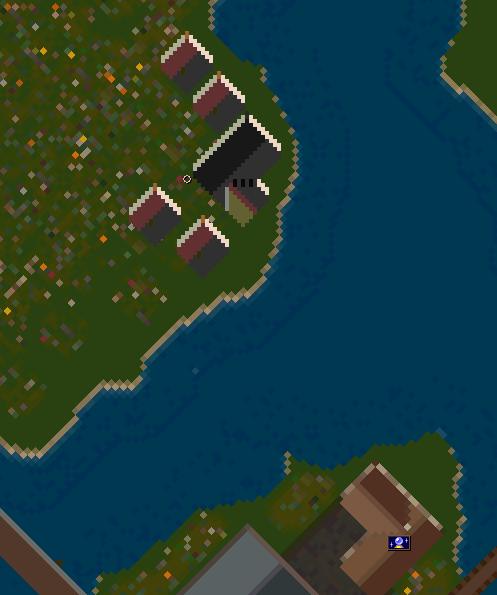 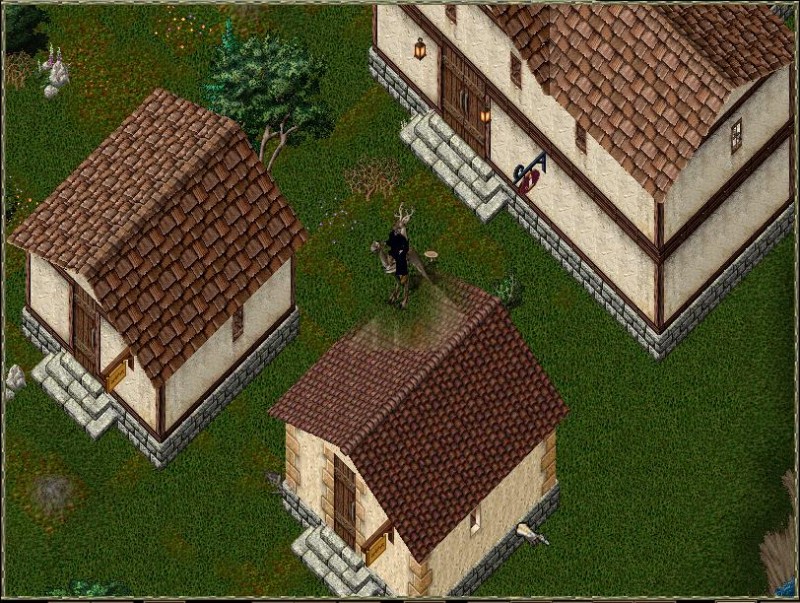 We have such a cozy little location lol.
Top

These past couple of weeks have brought us some excellent new recruits. As a matter of fact, they have resulted so good, they are now full members.

Hunts have been going great, and I hope we can keep the streak going. We still have members who need to finish their characters, and we all know, this takes money. We'll be holding Skill Improvement sessions as needed by our guild members.

Last night's meeting was a huge success, and I'm pleased to make the following announcements:
1.- Thanks to Dallas' iniciative, and Zershii's purchase of a large dragon ship, the guild now has a worthy sea faring vessel. We will be including sea expeditions in our list of activities, which will include fishing up MiB's. The boats key will be kept at all times in one of the Guild House's secures for all full members to access. If you are a member, and have not been friended to the Guild House, let me or Cattie know so we can friend you.
2.- Guild recruitment is back open. We will, as has been our style, be very selective of the people we recruit. Recruitment is basically focused on new players, if an established player of UOSA wishes to join, he MUST hold high references from several full members at least.
3.- Guild Ranks. A new title has been added: Nautus. Moving up the ranks requires members to be active, be on IRC during play time, and update the Guild Roster thread.
4.- Guild Roster thread. Please help us keep the guild stone clean. For these purposes we ask that you keep your post on the Guild Roster thread updated with the characters you have on the stone. Also, some inactive members will be gradually removed from the stone.
5.- Events. We will be holding more events in the future. Some great ideas were proposed last night, so be sure to check Forums regularly for their dates and times.

Looks like some great changes! Very glad to see the guild is still growing and changing....switching things up and adding in new ideas/content is key to keeping a guild going. Really like the addition of the naval aspect to the guild....finally, someone to give those pesky pirates a threat!

These last two weeks have seem some really amazing hunts, as any of us who participated in that hunt at Theratan Keep can verify. We even managed to chase away a couple of VERY experienced PK's, which shows what a good job you guys did.

We have also added a couple of new recruits, who have behaved outstandingly in our hunts.

There have also been a couple of advancements in rank, and a couple of removals of inactive players. I encourage you to check our guild page on MyUOSA, and post (or update your post accordingly) in our Guild Roster thread.

We have also added Neverland Customs [N$C], a peaceful crafter guild, into our list of allies. Stay tuned regarding news about their vendors.

I also ask you all to jump on IRC whenever you're IG so we can communicate better, and you don't miss our epic hunts. I'll also be joining our Vent channel whenever on, and I encourage everybody to do the same, PM me here or in IRC for server info and channel password.

Return to “Company of the Vigilant [C^V]”